In high school, I gravitated toward the creative kids.  I took ceramics and creative writing; I found myself in drama class doing a poor version of Monty Python’s silly walk. (I just couldn’t loosen up enough to be that silly.)  No matter what class I was sitting in, I suffered from imposter syndrome.  I was just the average teen admiring the output of kids destined for fancy art schools, exhibits, and Broadway musicals.

Fast forward a few years later, one of these artistic peeps I grew up with came home from RIT to visit family and friends.  We were at a mutual gathering and I saw her cute little VW in the driveway with a bumper sticker that read “ART IS HARD”.  This bumper sticker mentally glued itself to my brain and over a decade later, it still kicks around.

On a much larger scale, this bumper sticker is necessary because so many people undervalue the arts.  I’m not writing a dissertation here, but I think we all know that art education programs are either non-existent or underfunded.  Combined with the pressure to teach to standardized tests and an emphasis on STEM education, art fades into the background.  Let’s also be brutally honest and raw:  there’s still the starving artist stigma.  Parents are fearful that if their kids purse artistic endeavors, they will fail to be successful as defined by our culture’s limited definition of what success actually entails.  Anecdotally, I can’t tell you how many disparaging comments I have received for majoring in the liberal arts and for wasting my time blogging and doodling.

Just like a painting, this bumper sticker also lends itself to a different perspective.  Not only is it a reminder to others, but it also serves the artist.  I still have a hard time identifying as “writer” or “artist”, but for all intents and purposes, I am part of the club.  I have all of the emotional baggage and unreasonable expectations that come with the title:

A glimpse into my private journal illustrates the point succinctly: 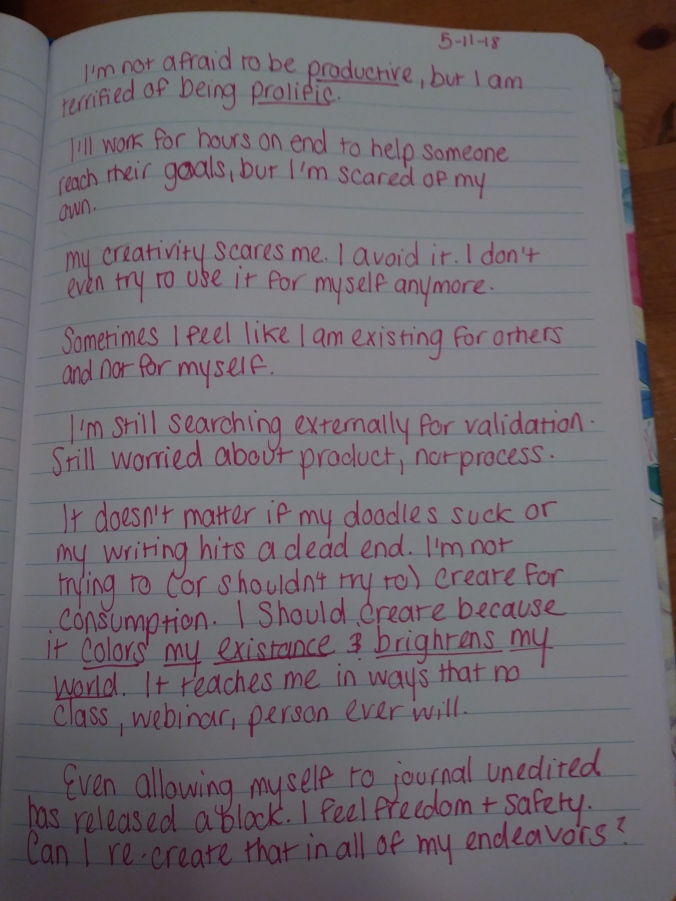 The reminder is necessary.  Art is hard.  This isn’t supposed to be easy.  From start to finish.  As Malcolm Gladwell argues in his book Outliers, the people that we perceive as naturally talented have practiced intensively – at least an estimated 10,000 hours.  That means that they set aside time to perfect their craft and they don’t give up when the first attempt sucks.  The creator must be resilient to continue onwards.

This brings me to the present moment:

I’ve been creatively blocked in a major way.  A few weeks ago, I realized that I wasn’t even allowing myself freedom to privately journal without censorship.  I changed that course of action, which inspired some movement.

Then I bought a sketch kit at Target (designed for kids) and decided to get back into drawing.  I spent my morning in the throes of frustration and near tears.  It has been so long since I had exercised this muscle and I felt the strain.  I started with the instruction booklets simple exercises and then decided to sketch a picture of an Eastern Casque-Headed Iguana.  Somewhere between the sketching and shading, I felt a release.

Does it look like a picture? Duh, no.  It doesn’t even closely resemble the picture.  If I were to start critiquing, I could find a dozen inconsistencies.

It doesn’t really matter though.  It’s mine and it made me feel something  wonderful.  It brought me back to where I want to be and also reminded me that it’s supposed to be hard.  Process, not product.

3 thoughts on “Art is Hard”