Common bookworm struggles include discovering new reads and having a large enough budget to accommodate said book discoveries.  When I stumbled upon Penguin Random House’s program, Blogging for Books, I was thrilled.  Free books in exchange for book reviews (which I happen to love writing)….a definite no brainer! 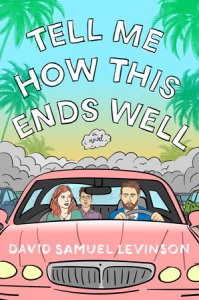 Within the literary fiction genre, David Samuel Levinson’s Tell Me How This End Well grabbed my interest as a work of Jewish American literature. The colorful dust jacket and cartoonish font belies the narrative found inside Levinson’s story, which is packed with complex characters and literary themes.  Some themes which grabbed my attention include:

From Bondage to Freedom

Passover, the Jewish holiday which recalls the Israelites escape from Egyptian bondage, serves as the symbolic backdrop for the novel’s main plot development.  The Jacobson family has endured the emotional (and sometimes physical) abuse of its patriarch, Julian Jacobson.  Julian has all of the traits of a psychopath and the family has suffered long enough under Julian’s watch.  As the family reluctantly gathers for the family Seder, a plan unfolds with the intention of killing Julian.

The plot is revealed through the narration of each of the Jacobson children, Jacob, Edith, and Mo, followed by their mother, Roz.  The individual attention given to each family member’s perspective is one of my favorite parts of the novel.  Readers are able to see Julian through the eyes of each person, and just like in real life, each Jacobson has internalized Julian’s actions differently. The plot to kill Julian is messy and often takes unexpected turns.  The family initially is not working together, which leaves the reader to ponder, “Which family member will lead the Jacobson family out of their own personal Egypt?”

An added dimension to Levinson’s novel is the tense relationships that exist between second (and even third) generation Jews and Germans, post-Holocaust.  Readers are first introduced to Jacob Jacobson, a queer screenplay writer living in Germany with his lover, Dietrich.  Levinson spends a lot of time describing the tensions between Dietrich and Jacob, which culminate in a bizarre beach scene where Jacob and Diet are arrested by the police for public indecency.  “What wasn’t right was so wrong, so utterly, horribly, disgustingly wrong, that it was nearly indescribable, nearly but not quite, for there was Jacob in the schmatte with the yellow Star of David embroidered into the pocket and there was Dietrich in the SS uniform, shiny black leather boots and all.”

It would take a lot of psychoanalysis and white space to break down the complexity of this scene.  My interpretation is that Jacob and Diet’s relationship ties into larger themes of power struggles, personal empowerment, and what it means to be a Jew in the 21st century.

In the futuristic landscape of 2022, American Jews are the subject of regular anti-Semitic attacks.  Israel has been disbanded and Israeli refugees find themselves unwelcome guests.  Even though this may be a work of fiction, Levinson’s portrayal of an isolationist United States is not too far off from our current political climate.  The questions which Levinson’s novel pokes at, and which every Jewish person has found themselves asking include, “What happens when things go south again?  What safe haven will exist for Jews?”  In fact, the title of the book, Tell Me How This Ends Well, can be an invitation to discuss not only the personal ending to Julian Jacobson’s reign of terror, but the larger ending (or beginning?) of the Jewish plight.

As the novel comes to a close, readers discover that Jacob is welcomed in Berlin.  Germany has become an unexpected ally to the Jews.  The U.S. Jacobson family members continue to struggle with anti-Semitism.  Jacob tries to convince them to join him in Germany, “…which made it a capital offense to harm in any way or kill a person of Jewish descent”.  Fast forward to 2024 and the last page of the novel, where Roz Jacobson has passed away and Germany has ratified the law, removing Jews from “The Approved List of Protected Species”.  In an uncertain and unsafe landscape without their matriarch, the Jacobson children continue onwards.

Tell Me How This Ends Well is a challenging and thought provoking novel.  The characters are memorable.  There are so many competing themes in the narrative and I felt the pull of all of theme, which served as a distraction.  With that being said, this would be a great book selection for a JCC book club or Jewish American literature class, as there are many angles to discuss.

I received this book from Blogging for Books in exchange for this review.